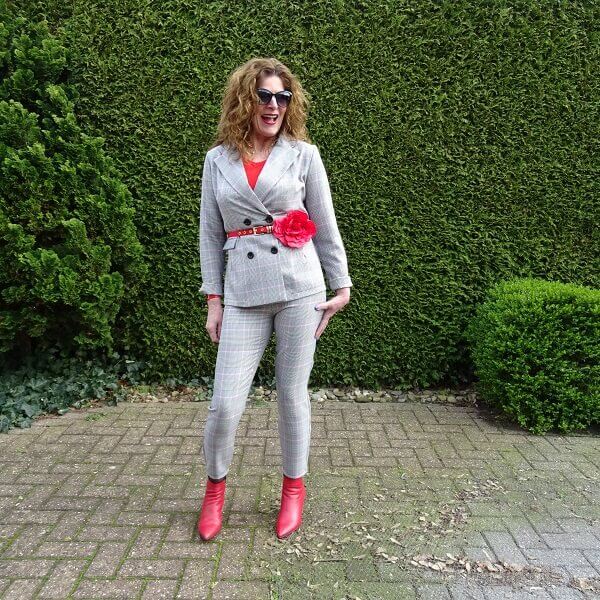 Because I don’t have these trousers anymore, and I liked the checked print, I bought this checkered suit for Spring! With pink in it!

But first something else then a suit! 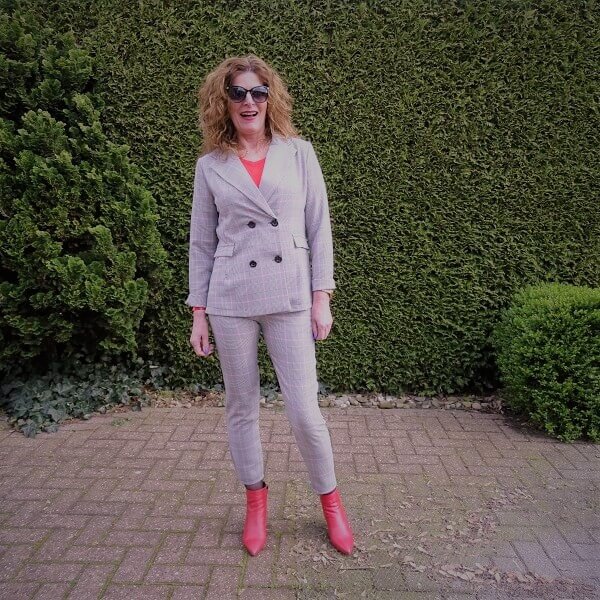 First of all, I sincerely hope that you and your family are all okay. And continue to do so.

A few weeks ago I had my appointment with the specialist lung nurse. I have that twice a year and twice a year with the lung doctor. Unless something goes wrong of course. I have known the lung nurse for 20 years, just like my lung doctor who retired last year. Very unfortunate, but my lung nurse is also a very nice person. And I wanted to know from her if I could go on a holiday by plane.

Since 2012 we havn’t gone on a holiday by plane. I’ll tell you why not. When I had to stop working in April 2012, that was a big blow to me. I loved my job. Soon I got anxiety and panic attacks and that got worse and worse. I quickly went to my pulmonologist and he initiated that I went to rehab and therefore also to a psychologist.

But that only happened the following year. In the meanwhile the attacks gone worse and worse. In August 2012 we would go to Ibiza with friends, which we have been doing for a number of years. And the night before we were supposed to go, I sat hyperventilating all night and I didn’t dare to go. I see myself as a fairly down-to-earth person but I cannot explain to you how those fears feel. Really awful and real. I did not dare to fly because I was afraid that I would choke on the plane or that I would not get air in Ibiza. All very irrational. Gerben then went to our friends in the morning to say we were not coming with them. Terrible situation.

Anyway, since then we have not flown anymore because first I did not dare and secondly I was not really stable the following years. My lungs that is. But Gerben would like to go to Spain again. So now I have to test if that is possibility. The test is only in May, so it will take a while but it is a bad test. Because you will get a needle in your wrist. And on the same day I have to prick blood gases, that’s what it’s called. Which is also in the wrist. So twice in 1 day!

And I can tell you that if you have someone who does not sting well, you will be hurt! Very hurt! And not all can do that prick well, it has to be in the artery. And I will have both my wrists in bandage, my goodness and that with my lungtube! People will feel real sorry for me…. So …. Gerben you already owe me one! (I probably have something on my wish list, don’t you think!) I’ll keep you informed!

My new checkered suit with pink in it 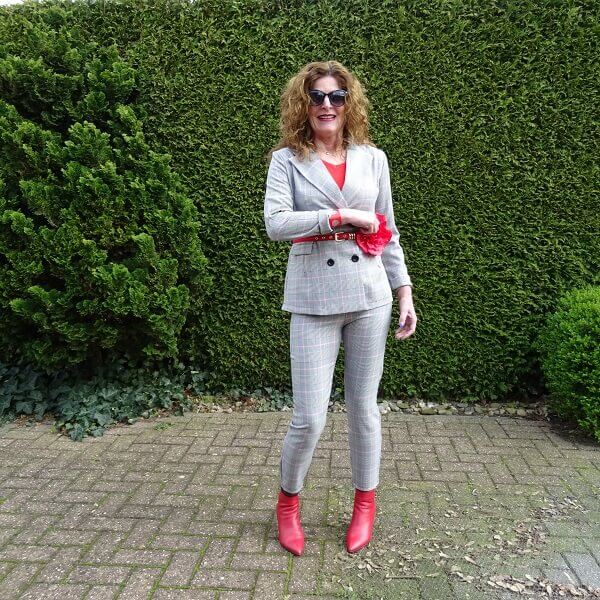 I knew I wanted ankle grazer trousers and a double breasted blazer in checked print. But I also wanted a color in it. Not only black white and grey. And what better color then pink for Spring! I now styled it with red, but any color would look good with it. The red bracelet is so very old, bought it in Canterbury 19 years ago. It is still one of my favorite bracelets.

The trousers are high waist, which requires corrective underwear for me. I added the belt and I think it looks better then without it! What’s your opinion on that? Can’t wait to wear this checkered suit with sandals and a white tee. 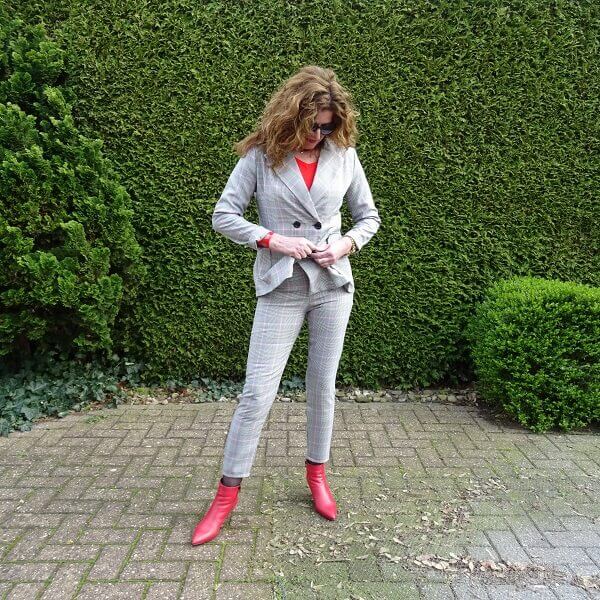 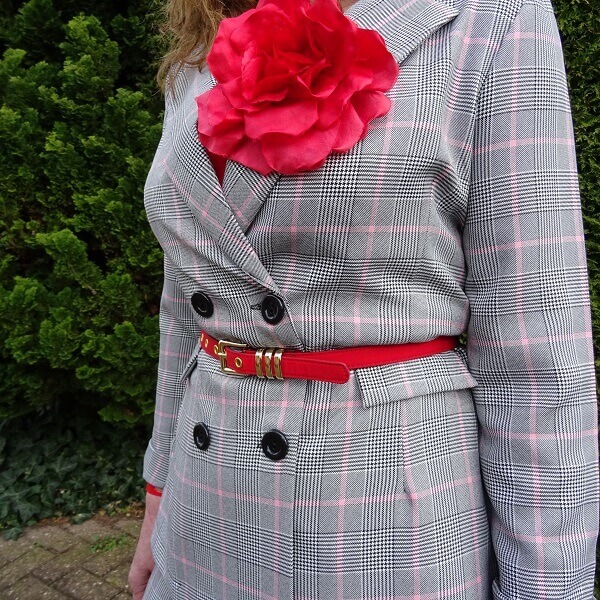 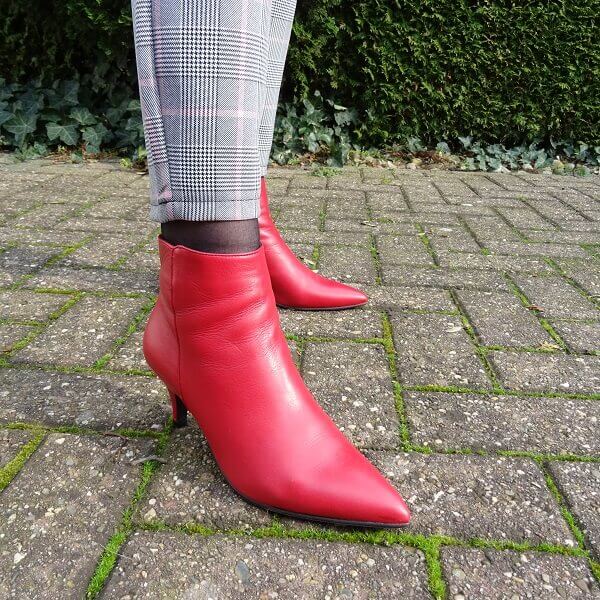 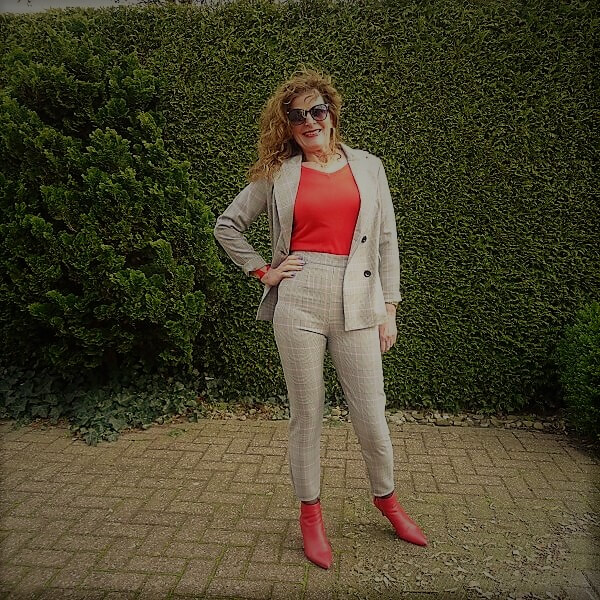 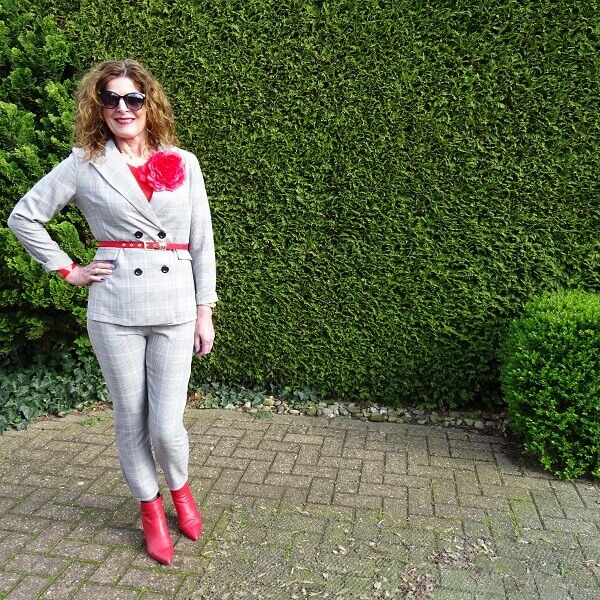