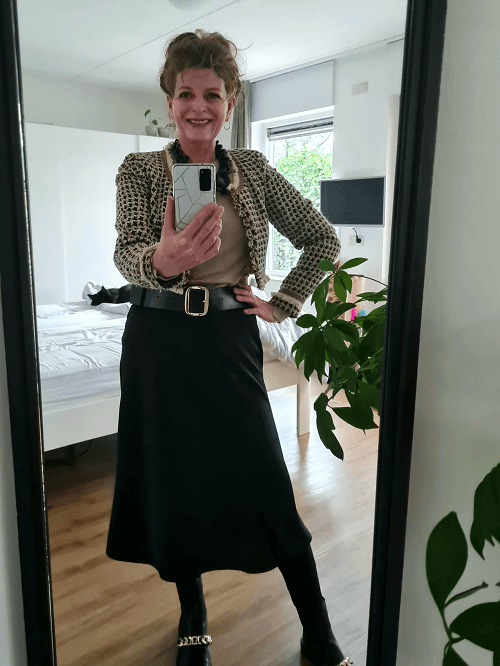 It was a strange week, last week. Busy, boring, stressful and relaxing. Fortunately, the weekend was good. How is it possible that now and then I run out of time, not even now or then, often! I don’t even work! We have nowhere to go! Sometimes I think I can just do less in one day, because of my health. But actually I do way too much, so it isn’t that really. Will I ever learn to slow down? I do not think so. I don’t know if you guys know me a little bit by now, but I’m pretty stubborn. I’ll just say it myself….

Stress, irritations and that sort of stuff 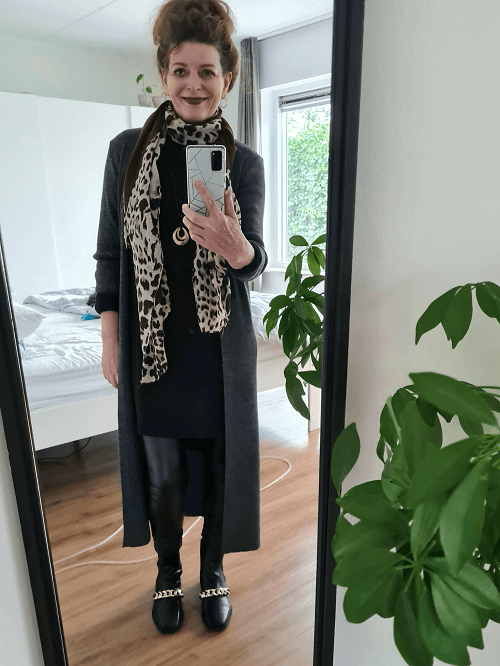 I wore a new grey long cardigan on a black sheer tunic and leather leggings. And a scarf! Learned from Jodie, who else! 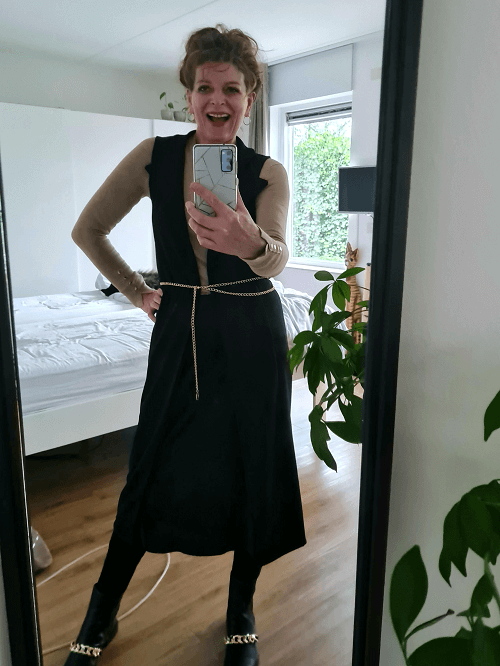 I tried wearing this vest. Not my thing.

I was actually busy arranging things last week. Email, calls, making appointments. People keep themselves so poorly to their appointments it seems, and then you have to get after to it while they don’t even bother. I get tired of that. So I was busy with that all week and cleaning and exercising. I divided the cleaning over two days because on Friday my sister and I went to my father.

The low point of the week was Friday, but at the same time a good start to the weekend. I’ll explain it to you. Friday started with the fact that I was very disappointed with my new phone, because I think the battery lasts far too short. I had already done everything to reduce battery consumption, including turning off notifications that caused me to miss messages. So I called the company where I bought the phone. And nowadays you stand on hold for 20 minutes and then you get someone on the phone who just reads a text from the internet. Yes I can look that up myself, thank you very much!

The weekend was a good one 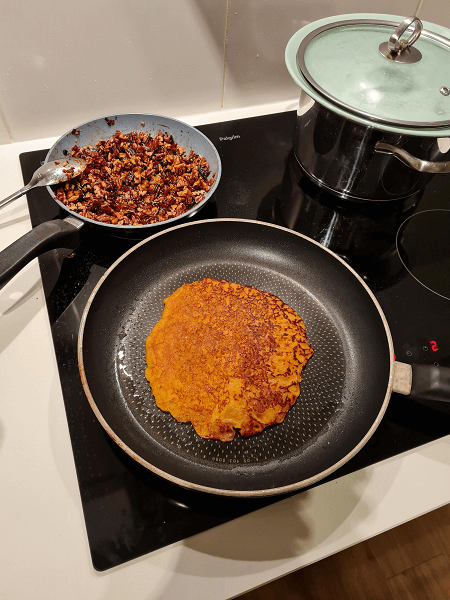 On Saurday we had pumpkin pancakes with cream 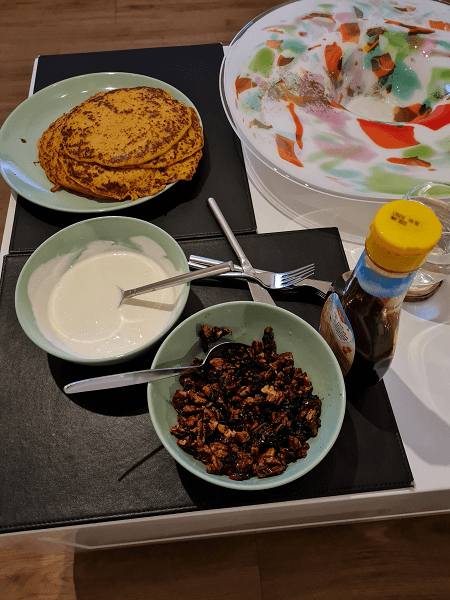 and a bacon, nut crumble with syrup. Very very delicious. 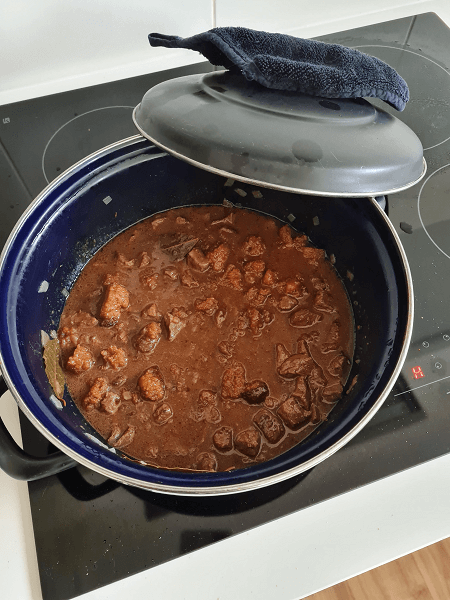 And stew on Sunday, I love this, and I am not even a big meat eater.

After that my email account was blocked when I wanted to send the emails out for the Fancy Friday linkup party. Called again, on hold for another 20 minutes and then hear that they no longer help you on the phone. What the ….! When I finally resolved it I was so pissed off. What a frustrating hassle. In the meantime Gerben called. He was at the garage, an hour drive away, because there was a scratch on the new car that they would have removed on delivery.

That had not happened and Gerben had to take a day off to go afterwards so that they could still solve it as agreed. By the way, they are a lot less friendly at that garage once you have paid. How I hate that. So when Gerben called, he said that the scratch now looks even worse than it was. And now we have to go back again to let it spray. That did not make the seller who sold the car to us happier. Well dude, you didn’t keep your appointment, and don’t forget that we are the customer, yes!! 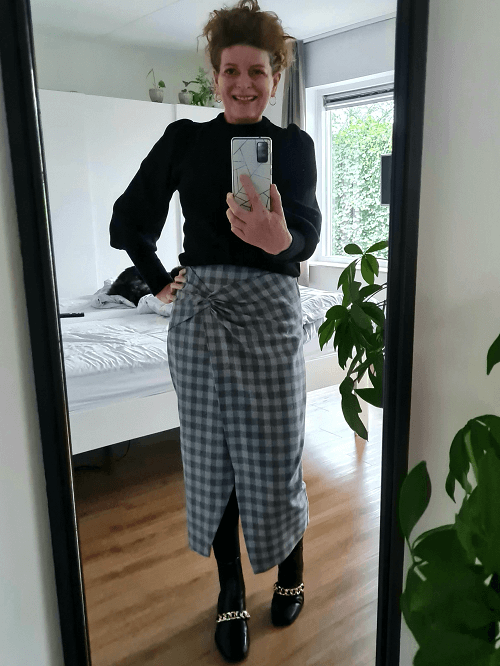 I wore this on Thursday, a nice warm sweater and a lovely knotted skirt.

And this on Sunday, the same sweater. Because it is so cold here!

Then I went with my sister to my father for a difficult talk about his health. Fortunately that conversation went well and then the tide turned and it became a relaxing Friday evening. Including Amaretto!

Saturday morning I did work out, while watching Saturday Kitchen Life, and then blogged because I still had so much to update. The rest of the Saturday was pretty relaxed with a lovely Saturday night watching the telly. The line of duty! Great series. The Sunday started late as we woke up at half past nine! After a long relaxed breakfast I worked out and in the evening friends came over to look at our new car. And we ended up drinking wine!

Not a bad ending of the weekend right! We had a delicious diner and a good relaxed Sunday night. Ready for a new more positive week now!