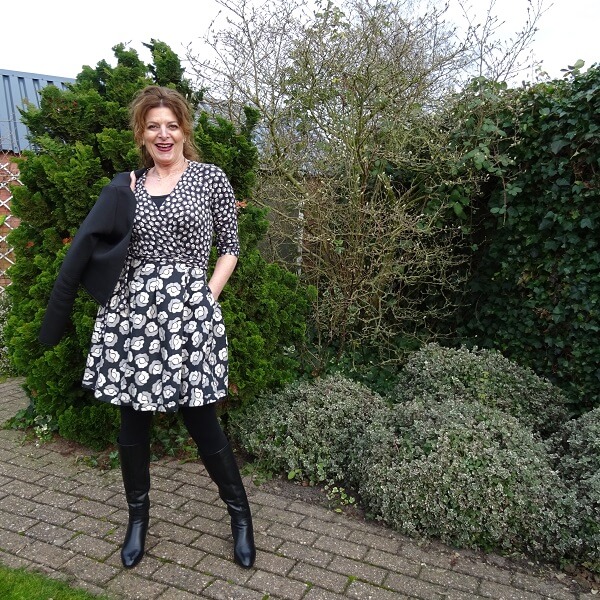 Have you ever swapped clothes? I never had, until I wanted to buy this dress and the owner asked for a swap!

As many of you know, I love wrap dresses. And certainly when they are designed by the great Diane von Furstenberg. I bought a very nice one in England last year and I bought two on a Dutch site. All pre loved. The story of how I got this dress is very nice.

How I came to swap clothes 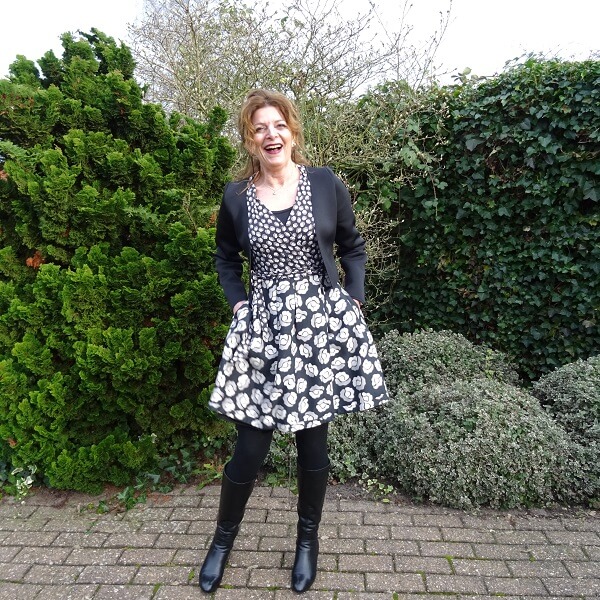 The two that I bought in the Netherlands were actually a bit too roomy for me. But to sell them again wasn’t that appealing to me as I am a huge Diane fan. And I didn’t want to give up my first two Diane dresses. But yes, I didn’t wear them either. So I still put them both up for sale on a site that sells all second hand things in the Netherlands. One I sold fairly quickly and the other was already off the site, because that goes automatically after a few weeks. At least I thought so.

Because I bid on this dress, and then the saleswoman mailed that I also had a Diane von Furstenberg dress for sale? So after some e-mails about the sizes, she asked if we could not trade! Well that was a good idea. A new wrap dress with closed purse. And this one fits me like a glove! I’m so happy with it. Best thing, the dress has pockets! And the other lady is happy with mine! I had seen a similar dress in Lewes, when I bought the other one. That was also with 1 print in 2 opposite colors. But that one was a size too small. And I found it so beautiful! And now I have this one! How nice it is to swap clothes! The woman I exchanged said more people should do that! I totally agree!

What do I wear with this swapped dress 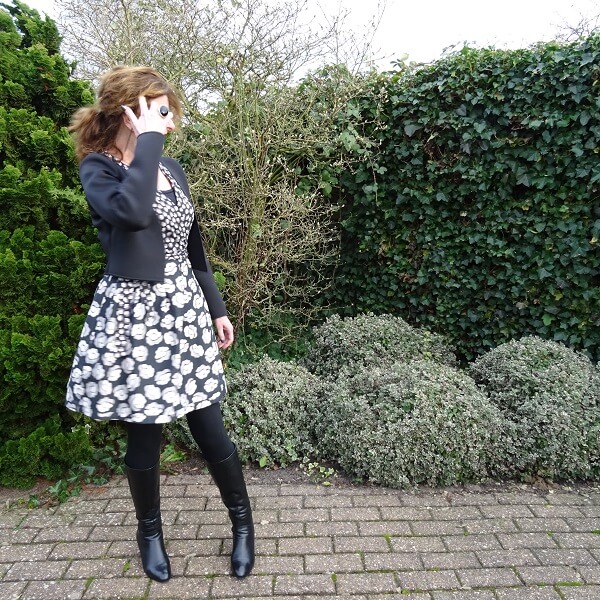 My black Italian boots and a legging. I could have worn tights but I wanted solid black surrounding the dress. And I am wearing a scuba jacket that Tessa made to wear with my custom made dress. My grey nails match perfectly with the grey watch and the statement ring that I also bought in Lewes! Which is a great town to shop by the way as you have noticed by now. In April I hope we will visit it again and otherwise we will in September!

So have you ever swapped clothes? I read sometimes that women have these swap nights. Where girlfriends swap their clothes! Have you ever done that? Sounds like a lot of fun! 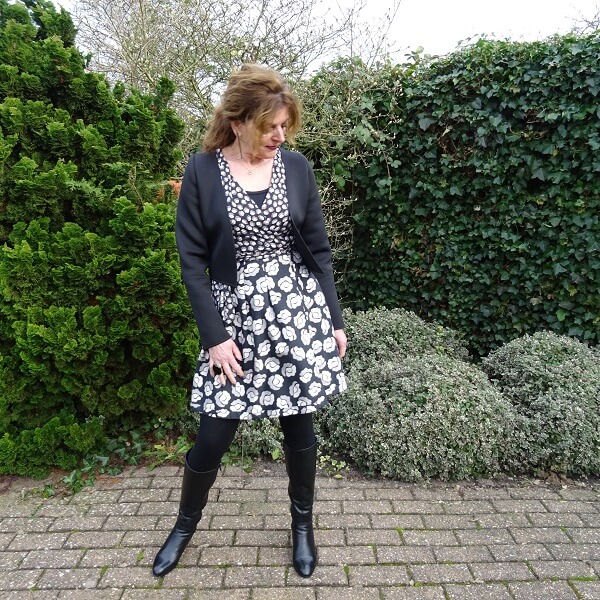 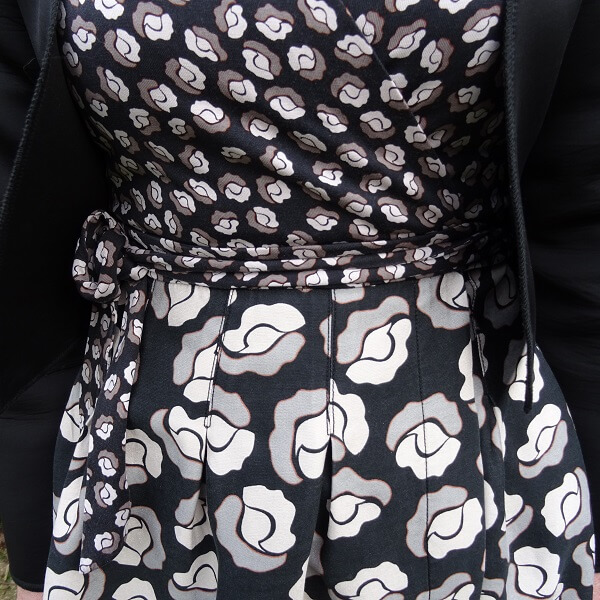 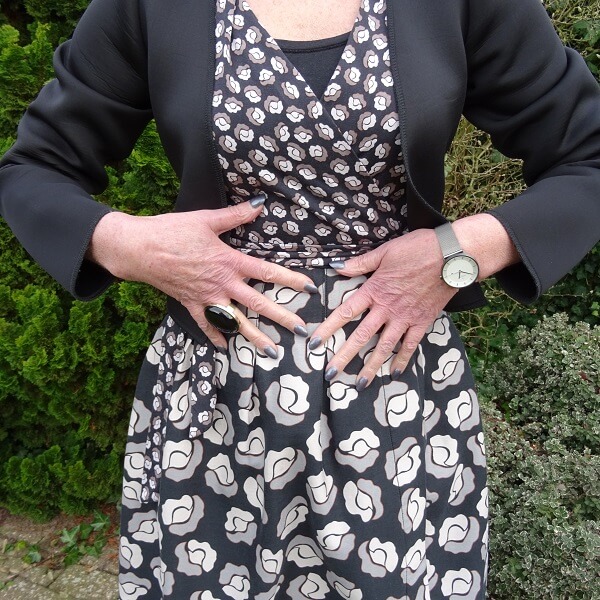 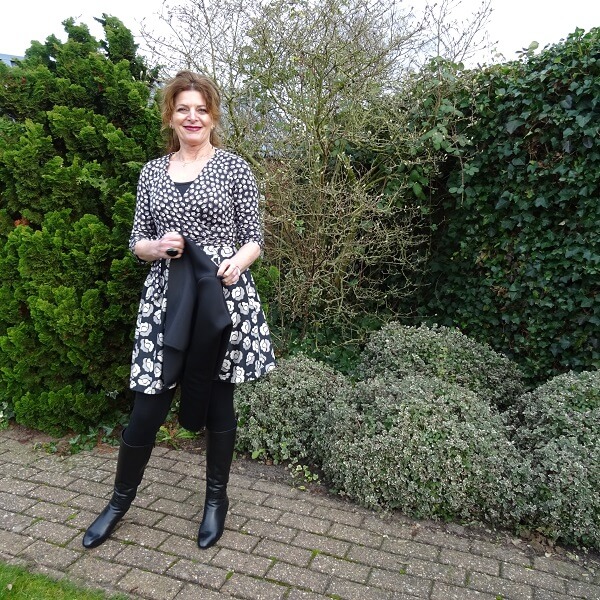